Bamberg has a special charm, small and located in the region of Franken, belonging to the Bundesland of Bayern.

We visited Bamberg as a weekend getaway from Erfurt, as it is very close by. Only 45 minutes with the ICE (the fast train), which by buying in advance, you can get very cheap prices. Here I explain 7 tricks that you should know to save traveling by train in Germany.

We stayed one weekend, slept in a tent at the Insel campsite about 4 km from the centre for 18 euros per night. We took our bike on the train to be able to go to the campsite with more freedom.

In the last years, AirBnB is taking more and more relevance. Many hosts are published by this platform more and more. If you do not know it, here I talk about the pros and cons.
In general, they cost less than regular hotels of Booking, but some of them are unique, you have more space, privacy and so on!!
Open a new account of Airbnb and get 10% of discount in your first booking!
Important: if you already have an account or you have used the discount, you may make a new account signing up the name of your brother, mother, father, grandparents, friends, girlfriend, etc to countinue enjoying the discount!

See all accommodation offers in Bamberg

Eating and drinking in Bamberg

We ate in one of the German breweries in Schlenkerla Brauerei with traditional German food and a freshly brewed craft beer. A plate + beer, 24 euros two people.

It is on the same square where Katzenberg and Dominikanerstr. cross, there are several interesting breweries/restaurants.

Its picturesque old town has been a UNESCO World Heritage Site since 1993. Furthermore, Bamberg is situated on the castle route (Burgenstraße), together with Rotenburg o.d.T. and Schwäbisch Hall. 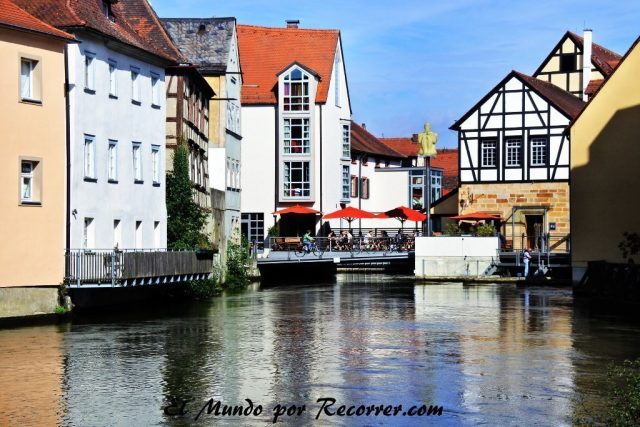 City bathed by the river Rhine with a lot of German tourism and a little bit of foreigner. Famous are its multiple and small breweries of artisan elaboration.

It has about 70,000 inhabitants and spending a day there is more than enough to take a walk around the whole of the old town to simply stroll through its narrow streets, squares, convents and facades with a medieval aroma.

There is a tourist information point in Inselstadt, where you can hire multiple guided tours, dramatized visits, beer tasting, visits to the breweries … It is also useful for receiving personalized information, information brochures or maps of the city.

The old town hall (Rathaus), which was built in the middle of the river and only connected by bridges, is worth mentioning. Legend has it that the city’s bishop did not want to give up land to build the town hall. That’s when the neighbors nailed some stakes n the river in order to create an artificial island for its construction.

Bamberg’s charm lies in the fantastically preserved and renovated medieval streets in the Bavarian style. In the city there is a mixture of architectural styles: Romanesque, Gothic, Renaissance, Baroque, as well as modern styles.

The traditional facades have a multitude of details: coats of arms, cornices, flowers, balconies, frescoes, arches, vaults. There are many typical baroque constructions with wooden beams seen from the façade.

The city is divided by the river Rhine and its branches into three parts: Inselstadt (island city), Bergstadt (mountain city) and Gärtnerstadt (garden city). The Inselstadt being the most interesting.

There are several ancient mills and dams, which provided the city with important energy not only for grinding wheat, but also for pressing olives or meat.

Inside the Carmelite convent there are some corridors with crossed arches from the 12th and 13th century, where you can rent an audio guide.

In the Plaza Imperial and Episcopal is the New Residence of the seventeenth century, where inside there is a well-cared for rose garden and balconies overlooking the city. Not being too tall, you can’t see much more than rooftops.

Have you visited Bamberg? What do you think? Any comments or suggestions are welcome!

All for organize your trip to GermanyContinue travelling in Germany with the following articles: