What to see in Dresden on a weekend? Dresden has a very cozy old town, mainly baroque in style, and a new town (even hipster-cool) on the other side of the river

It is a perfect city to visit as a weekend getaway, with 2 days are enough to see the city calmly.

Moreover, although I had been there before, during my last visit (just before I wrote this article), Dresden surprised me a lot (and for good!).

I went from the idea of a grey city with a certain old and far-right mentality, to a big city with many leisure possibilities and a powerful alternative neighbourhood.

Some call it “The Florence of the Elbe River“ because of its architectural style. It’s the capital of the state of Sachsen in Germany and hosts just over 500,000 inhabitants.

In this article I listed the main attractions, prices, accommodations and other tips to spend a few days in Dresden!

We sleep in an Airbnb near the central train station (using the discount coupon when opening a new account). It was about 30€ for 2 people.

icon name=”hand-o-right”] If you’re looking for backpacker hostels, there are 2, both located in the alternative neighborhood. A bed in a shared room costs between 15-17€/night. Lollis and Mondpalast.

For private rooms or hotels:

See all accommodation in Dresden

To tour the city you can walk to all places of interest. For example, starting at Postplatz and from there to the 4 most important attractions of Dresden:

Walking from the central train station you will pass the shopping street (Praguestr. to the Wienerplatzt) until you reach Neuemarkt and from there you will continue to the old town.

On Saturdays, there is a free tour (Freetour based on tips) at 1pm and at 2pm in English. They have a red umbrella and the starting point is near the Frauenkirche. More info.

Do you want to know how Freetour really works? Read the article from “Are FreeTours Really Free?”

It is the church and recent symbol of Dresden. But what struck me most was the story behind this apparently normal church:

The original church was destroyed in World War II like almost the entire city. What there is at present is that it is an entirely new reconstruction completed in 2005. It has been financed by donations between 1990 (after German reunification) and 2005.

In the new church, they wanted to reuse the old materials as much as possible. This is why new stones can be seen next to black stones on the façade. More about the reconstruction on the church website.

The Frauenkirche (German for “women’s church”) is right in the main square of the old town, so it’s a good starting point.

Organ concerts take place inside this evangelist church. Since it is tradition the masses with live music of the organ, that a modern version of the one that Sebastian Bach played in his day.

Entrance is free as long as there is no mass, but to climb up to the panoramic terrace and have the best view of the city, you have to pay € 8. In the case of bad weather, I think it’s not worth paying for because you won’t see much… The stairs are a little narrow, but they go up.

Palace and gardens of Zwinger

The Zwinger is Germany’s best-known baroque building and one of Dresden’s best-known attractions. Originally from the 18th century, but partially rebuilt after the bombings.

The fountains and gardens in the inner courtyard will take you temporarily back to the 18th century.

Entering the gardens is free. But inside there are several museums and exhibitions in which you pay an entrance fee. For the palace it’s 14€.

In addition to being an ancient and imposing building, this square became (unfortunately) famous for the Monday demonstrations. The so-called “Monstagsdemo” took place every Monday, politicized by the German extreme right. They call themselves PEGIDA (which would mean something like European Patriots against the Islamization of the West). More info in Wikipedia.

From the opera, to show his rejection of this type of movement and the demonstrations in front of the opera, he hung some multi-colour posters to contrast with the message “For a Dresden open to the world”.

To enter and see the building from the inside you can do some guided tours. Especially a visit at 10 pm for about 11€.

More info and tickets at www.semperoper-erleben.de

Former governors’ palace and royal family. Also, like most of Dresden, recently rebuilt. In the interior there are 5 museums, the most well-known is the Grünes Gewölbe. To buy tickets (12€) and more info.

Entering the courtyard is free, and I think it’s worth a look.

From this building the great mosaic of “Fürstenzug” stands out, which is one of the highlights of Dresden. It would be the equivalent of the street-art of the time and has about 100 meters. It is estimated that 23,000 tiles. It tells the chronological history of kings, princes and great battles between 1127 and 1873.

You can’t miss a photo on the terraces “Brühlschen Terrassen“, also known as the “balconies of Europe”. They are about 500 meters and about 10 meters above street level. It’s a nice walk on the edge of the river, where you can also enjoy the tranquillity of a sunny morning (yes, sometimes the sun comes up in Dresden!).

It is the great central square surrounded by buildings. In the bombings it remained practically empty, but it was later partially rebuilt during communism and especially after the fall of the Berlin Wall in the 90s. This is where events such as Christmas markets, concerts, etc. are held.

In the centre of the square there is a memorial to the victims of these same bombings in February 1945. Every year, during the anniversary of this date, it is still filled with flowers and candles.

This is the bridge that connects the old city with the new part. In addition, the Augustus Bridge was made “viral” in its time by a painting by an Italian painter. In the middle of the 18th century, Bernardo Belloto painted the views from the bank in front of the old city.

More info about painting in wikipedia

Other things about Dresden

Assi-Eck (Assi is meaning “antisocial loser) is an area where young people meet to have a few beers and socialize. The corner name Assi is ironic, since the people who go there are rather open-minded hippies.

It is in the new part of the city at the intersection of Louisenstraße-Görlitzer Str. And can be a good place to get to know the local culture. In addition, the entire neighborhood is an area of bars with a lot of nightlife.

The area of bars and nightlife is all in the new city. If not knowing where to start Katy’s Garage is a good choice!

They are courtyards decorated with urban art. I really expected more, but it’s not bad to hang out there for a while or even have a coffee/beer in one of their cafeterias. It is located at Görlitzerstraße 35 in the new part of Dresden. 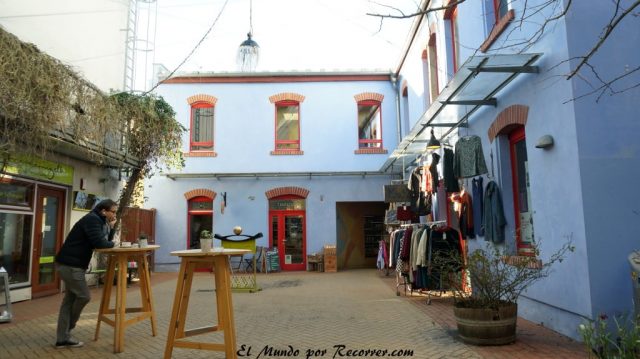 WOowoooW, is a former gas warehouse, now converted into a 360º museum. The idea is that you enter the center of the cylindrical building, where a single large printed photo surrounds you.

Everything is designed so that the sensation is totally immersive, transporting you to the place or time when the photo was taken.

It would be like an equivalent to virtual reality, but without glasses.

It’s behind the big park, about 5km from downtown. The theme of the photos is changing, but Dresden 1945 is the most interesting, as it shows how the city was after the bombings that same year.

I recommend you try a glass of milk at the Pfundsmolkerei. It is a traditional dairy where they produce all kinds of dairy products.

The “Buttermilch” is a very thick, somewhat sour milk that costs only 1€. I fully recommend it!! Just for try…

It is not possible to photograph inside and according to themselves they claim to be “the most beautiful dairy in the world” (der schönste Milchladen der Welt).

A good alternative plan for summer nights (from the end of June to the end of August). The films are screened on a large screen on the banks of the river Elbe (classic and new) in the open air with the old town in the background.

The calendar of events can be found on the Filmnächte website.

Picnic in the meadow of the river Elba

A large expanse of grass is at the edge of the river prepared for the locals are going to have a drink at sunset. It’s on the other side of the old part of town.

It is undoubtedly the largest park in Dresden and hence its original name “Großer Park”. It has a rectangular shape and a large avenue that crosses the park transversely. In the centre, on the banks of a small pond, stands a baroque palace.

To get to the Panometer it is almost obligatory to cross the park, which, with the exception of the baroque palace at the edge of the lake, has nothing special but people doing sports or going for a walk… Like most parks, right? 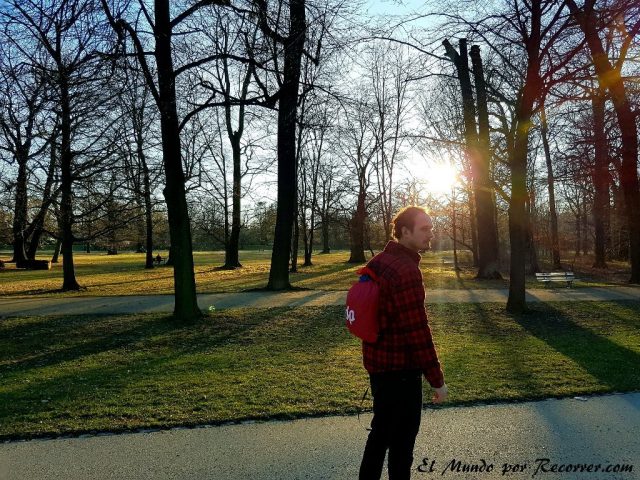 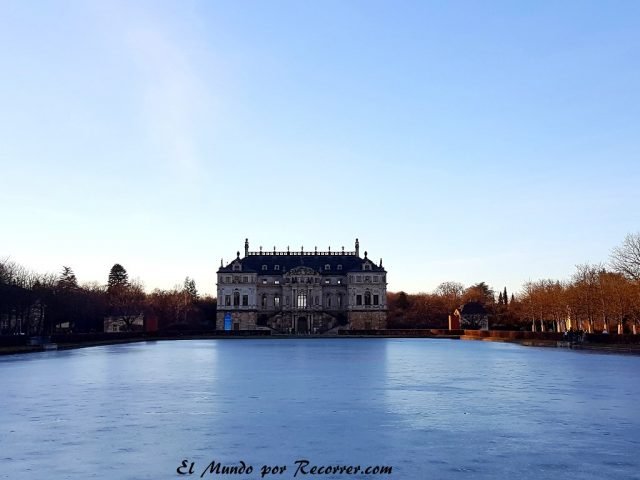 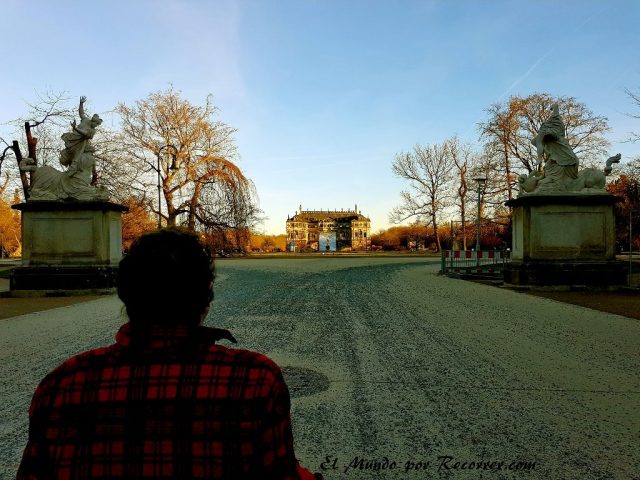 To walk around the center, it’s best to move on foot. But to go to the big park (Grosspark), to the Panometer or simply to walk on the banks of the river Elba, renting a bike is a very good idea!

The company is called SZ-Bike, which uses an app to manage everything.

You need to have an internet connection at all times, or at least to rent and leave the bike.

Moritzburg is a baroque mansion on an artificial island in a lake. It was the former summer residence and hunting ground of the kings and governors of Saxony.

It’s a tour I recommend to everyone who visits Dresden and doesn’t just stay in the historic centre. The beauty of this old palace is its idyllic location in the middle of a small lake.

You can go and come back on the same day (13 km), although we prefer to sleep in the village of Moritzburg (Landhaus Hotel for about 65€), to be there early the next day. We also took the opportunity to have dinner some game meat in the small restaurants in the area.

How do I get there?

To get to Mortizburg from Dresden by public transport, you can take a bus in just over half an hour (number 477) from the train station (opposite the lidl) to the village of Moritzburg. Bus schedules. From the stop “Dresden Bahnhof NeuStadt” to “Moritzburg Schloss”.

Next stop on the route

Other nearby destinations to follow the route in Germany:

All for organize your trip to GermanyContinue travelling in Germany with the following articles: